When Back to Black landed 10 years ago today (October 27, 2006), some dismissed Winehouse as little more than a novelty. Here was a tatted-up, boozed-out Brit bringing hip-hop vernacular into vintage American R&B. Even her name — conveniently abbreviated to “Wino” by the U.K. press — made her appear a cartoon character, a switchblade Marvelette, more substances than substance…

I have loved Amy and her music and continue to be inspired by her strength, not with addiction, but to push against society, expectations and cultural norms. While the media outlets love putting her on ‘most ugly’ celebrity lists, I continue to look beyond the surface to see her for the beautiful person she really once, no matter how broken.

The aesthetics of art is what makes it beautiful.

The aesthetics of art is what makes it beautiful.
Powered By the Tweet This Plugin

Like Kurt Cobain a generation before her, she struggled with the spotlight, negativity and ignorance when it comes to the opinions of others. While she would eventually succumb to her demons, it wasn’t without being true to herself and not what news outlets wanted her to be.

I think we can learn a lot from that. 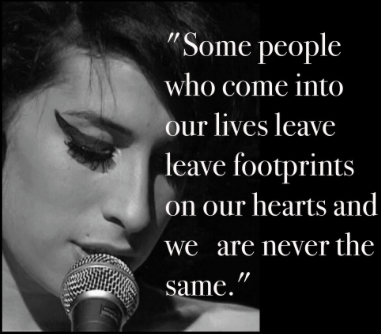