This simulation demonstrates the law of large numbers, a key theorem in probability theory, which describes the result of performing the same experiment a large number of times.

According to the law, the average of the results obtained from a large number of trials should be close to the expected (theoretical) value, and will tend to become closer as more trials are performed.

When rolling a die, the theoretical chance of landing on each face is 1/6. But when conducting an experiment with only a few rolls, the results are likely to be much different. However, rolling one die a thousand times will produce results closer to 16.67% (1/6).

Try it for yourself!

Can you program this die to be weighted? Can you remix my code to produce a die that lands on 6 more often than the other 5 faces? Give it a try! 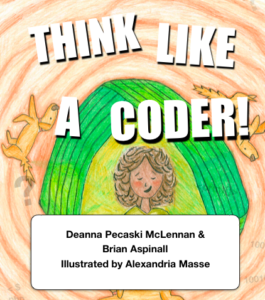 Coding is everywhere! Follow along with a girl and her dog as they explore computational thinking in their everyday activities. Colourful illustrations and easy to access text help readers recognize that many of their daily explorations – cooking, playing, and even being outdoors – provide opportunities to explore and problem solve. Readers will be entertained by the antics of the girl and her dog, and parallels can be drawn between their daily work and that of computational thinkers. A great text for anyone wanting to introduce, and learn more, about computational thinking in the world around us.