Makerspace is a growing trend in education that requires aligned pedagogical beliefs and philosophies, but unfortunately gets implemented without much foundation, research or understanding of constructivism. Maker culture leans heavily on the idea of constructivism – that is, the notion that learning is best done through doing.

“I am convinced that the best learning takes place when the learner takes charge.” – Seymour Papert

Maker culture is not something that we can easily define as it means different things to different people. Regardless, the movement from teacher centred to student centred activities requires a major shift in thinking and years of un-doing.

Many people define the last century of education as the industrial model – that is, a place where kids complete repetitive tasks in specific increments to prepare them for a factory line style position. With the ever growing increase in automation, industry looks different today than it did thirty years ago.

In schools where teachers typically lecture, provide assignments and handouts and test students at the end of a unit, a great deal of work is required to shift to a maker culture. Students are comfortable in being told what to do and understand the requirements to achieve what the teacher is asking of them. These types of schools tend to offer makerspaces that the teacher advocates for. If he or she likes robots, the students play with robots. If plastic cups and popsicle sticks are on sale at the Dollar Store, kids build towers.

“Making is a combination of learning, researching, and (rapidly) putting ideas into motion.” -Kegan Schouwenburg

Maker culture is more of an organized chaos. Quite often, the direction students take is not necessarily what the teacher had planned or predicted. Makerspace and maker culture rest on the notion of risk taking, trial and error, a freedom to fail and passion projects. Ironically, we cannot expect much of these criteria in an evaluated system as there is too much risk in not getting the grade.

“In education, we largely use the language of empowerment but the actions of control. Is this true, and how does edtech play into that?” – Steve Hargadon


More and more libraries are being converted to makerspaces on a daily basis across the globe. I receive regular emails from people looking for the perfect checklist of hardware to create the perfect makerspace. However, makerspace isn’t about stuff.

Kinaesthetic activities, learning by doing, hands on, etc. all require teachers to shift their practice from comfortable to uncomfortable. Students will be working on different projects, at different paces, and at different times. Nothing about makerspace is standard nor can creativity be measured by a standardized test. In fact, measuring the success of a passion project is not possible with a rubric of qualifiers as rubrics themselves tend to be standard in structure.

How do we empower, inspire and drive kids to want to pursue their passions?

The biggest shift in my own pedagogy was the notion of letting go. For so long classroom management was directly correlated to the volume of noise in our classrooms. “Running a tight ship” meant kids were learning and you were doing a great job policing the noise level. But I am not a police officer.

“At MakerBot, we joke that if we were engineers we would still be on our first prototype. There’s something about just ‘Doing it”…iteration is a way of engineering.” -Bre Pettis

For so long I thought I had to know everything there was to know about technology when I should have spent my time learning my curriculum. It is imperative to recognize curriculum during makerspace activities so teachers can utilize those teachable moments in an authentic context. Traditionally, curriculum was taught in a silo – it was chunked into units and placed on a schedule. Maker culture relies on the notion of a spiralled curriculum where different students demonstrate different expectations at different times. Clearly this is difficult to manage from an evaluation lens. The “industry” model of education is easier to mark. All kids do the same, at the same time.

But industry has changed and so should education. Makerspace and maker culture are unique opportunities to develop collaboration, creativity, critical thinking, computational thinking, and a growth mindset. They are not new computer labs.

As happened with computing devices, someone’s idea of a “maker space” is set up in a corner of the library, stored in a vacant room, or assembled in a cart rolled between classrooms. With students performing pre-planned activities for a fixed period of time, before returning to their “real” work.- Tim Stahmer

Maker culture is not about stuff, it is about mindset. Create a culture of independent problem solvers, risk takers and doers – both among staff and students. Then you will be ready for stuff.

“I think of the maker movement as being the web generation meets the real world.” – Chris Anderson 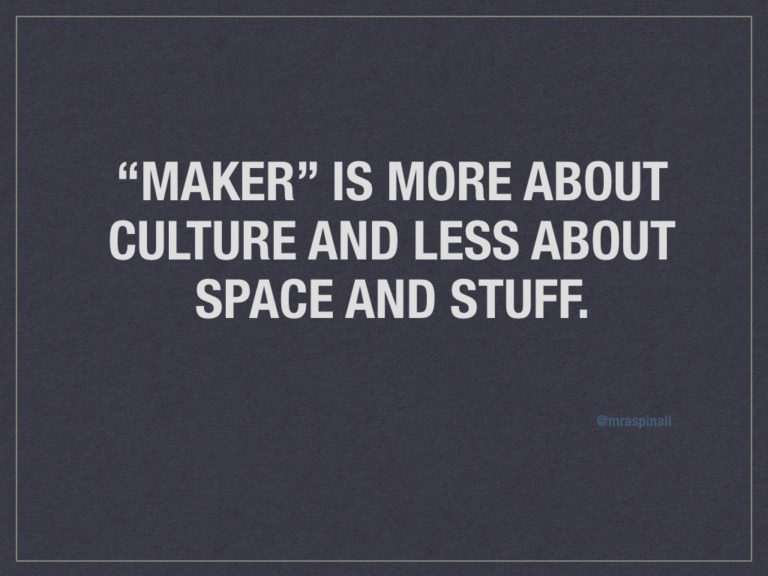