The first rule of Fight Club is: You do not talk about Fight Club

We don’t really have a school wide set of rules. This can be problematic for some staff who need the boundaries made clear, but students don’t seem to mind. They have taken ownership of the school. Complete ownership.

I’m not saying we don’t have rules. What I am saying is we have one rule. Common Sense.

If we find a student making poor choices, we talk to them. We don’t punish, per-se. Instead we redirect the poor decision-making into a positive and have a conversation.

After spending two years on the journey, I am completely convinced that student lead schools are the way to go. We don’t make classroom rules on the first week of school in September.

Here is what I have noticed:

It is important that we stop running schools with an authoritative mindset. When students take ownership of the building, it’s pretty darn cool to watch. This won’t happen overnight and it can be a struggle to let go of control, but when you get that first glimpse of the success, you’ll see what I mean.

Here is a picture of some of our grade 8 students at recess. They do not have to go outside if they don’t want to. They also don’t have to stay in their classrooms, if choose not to.  I don’t see anything wrong happening here. They look pretty happy to me.

We haven’t suspended a student in two years, not because we don’t punish, because there hasn’t been an issue. 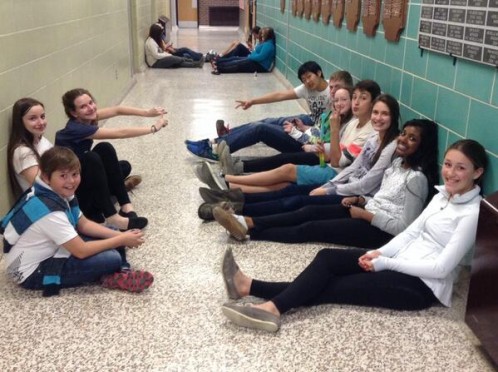 That Age Old Battle: Please Remove Your Hat in School

Its Not About The Technology