Recently I had the opportunity to visit some very northern parts of our beautiful Province. Full disclosure, I consider Sudbury to be quite north and it isn’t even half way to Sioux Lookout, so I was slightly apprehensive about this trek. I experienced the wonderful Bearkin Airlines and met some very friendly people who could tell I was quite nervous to fly in this “plane”. 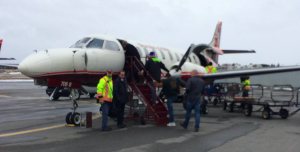 In full Bearkin fashion, the pilot even let me fly! 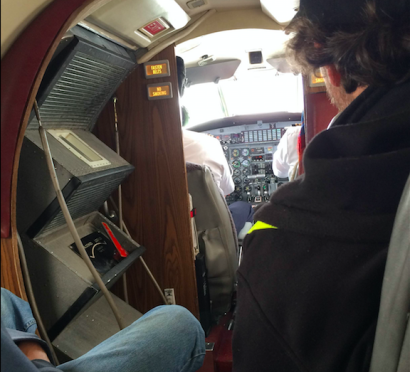 Kidding of course, but I was close enough I could see every move the pilots made.

As I reflect on my experience in Sioux Lookout, Dryden, Fort Frances and Atikokan I can’t help but feel guilty. First, the reduction of paper use has created significant job loss since the closure of most paper mills. In Fort Frances alone the mill closure in 2014 had a significant direct impact since it was the leading industry in that community. I’m struggling with this as an advocate for digital classrooms. A part of me feels tremendous guilt and sadness for families that have had to relocate. And it’s not like the next town or city is close by. From an educator’s perspective I can relate to declining enrolment due to industry bust but am now empathetic with new teachers trying to get hired in a town previously surviving on the paper mill industry. Also, since schools are so far apart, supply teachers can only report to one or two schools. I imagine the mathematical relationship is quite relative to us in southern Ontario. More teacher jobs, but more people trying to get hired. However, imagine only being able to work in one or two schools because of geography in a declining enrolment era.

Secondly, I spent two and a half hours travelling south on Highway 502 from Dryden to Fort Frances. Two and a half hours on a highway with no shoulders, no place to stop, no place to turn around, and zero cell phone service. I can’t even provide you with a Street View so you will have to accept this satellite shot. Every few kilometres we were reminded to watch for moose by bright yellow signs that implied moose like to run at you quickly. 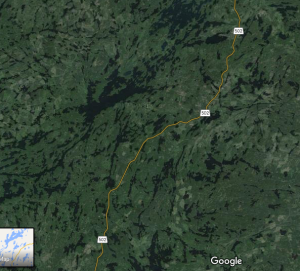 Did you catch that part about no cell service? I was warned and told “text someone before you go and tell them to expect a text in two and a half hours, then text them when you get service again” because that is the norm. I complain when my LTE hits 3G when some parts on Northern Ontario cannot get 3G or a signal at all! I think about the equity concerns we have here in the “south” in that some of our students don’t have internet access at home but how often do we really think about kids not even being able to have access because it doesn’t exist.

The experience has certainly provided me with perspective and I am grateful for that. Thank you Lisa (@lisa_itismelisa) and Ashley (@AshleyMcquaker) for the tour and I promise to repay you if you ever come “south”!

The Myth of Average