Last week I had the most fortunate opportunity to attend Microsoft’s E2 Global Educator Exchange conference in Budapest, Hungary. The E2 – Educator Exchange is Microsoft in Education’s annual event recognizing and celebrating the achievements of educators who combine content, pedagogy, and technology in exemplary ways to prepare students for success. This event brings together the most innovative educators from around the world to collaborate, create, and share their experiences on how to integrate technology and pedagogy to advance learning, achieve student outcomes, and transform education.

I wasn’t entirely sure what to expect but knew we’d be put to work hacking lessons, creating content, challenging thinking and addressing global concerns in education. It is interesting to note the common thread, regardless of language, country or grade level taught – we are shifting from a culture of consumption to a culture of creation and need to educate all stakeholders in education of this movement.

For the first time in over a century education is changing, and changing rapidly.

The classroom I went to school in no longer exists and the classroom I have today will look much different in September. With such an advance in how we deliver lessons, engage and empower kids, it’s crucial that we bridge the technology skills gap. There exists a major disconnect among teachers, parents, administration and students regarding comfort, availability and just plain know-how.

Each of the three days began with a morning keynote that paralleled some big ideas. Educators have begun to brand a set of skills as “21st century competencies” which includes coding and computational thinking. There wasn’t a single person who didn’t agree that coding is an important digital literacy.

The theme of #HackTheClassroom put some perspective on this whole edtech world. There was a sense of comfort associated with it that made everyone feel like they were apart of a team. How can we take really good “traditional” lessons and rework them using the tools and technologies of today for improved delivery, efficiency, engagement and empowerment. How can we hack assessment and evaluation to move from an emphasis on numbers to mastering skills?

Each afternoon consisted of breakout sessions that explored things like coding, Minecraft, TouchDevelop and ProjectSpark. There was a massive buzz about as if you were missing out on the next room, regardless of which room you attended.

There was great energy, not just about tools, but about using tools to help kids learn.

Not once did I feel like I was being sold on particular technologies because, after all, the break out sessions were delivered by amazing global educators. I learned more about Minecraft as a teaching tool for math, history and language arts. I coded in ProjectSpark as I developed the ideal classroom (yes, it had a makerspace). I engaged in conversation with people from across the globe who are all doing some very amazing things.

One of the biggest personal highlights was the two hour maker fare. What better way to get educators to construct knowledge of “making” (yes, pun intended). I had an opportunity to tinker with the MicroBit from BBC. This device contains a few inputs on the board itself as well as a grid of LEDs. Using TouchDeveop, users can code the board to display certain light patterns. I immediately took the challenge of coding a coin flipper to help teach probability.

This was definitely a once in a lifetime opportunity and I have made some lifelong friends. Jim Pedrech, Meg Chopek, Lia DeCicco and Dean Vendramin – you always have a place to stay here in southern Ontario. I think I’ll finish this post by paraphrasing Jim when discussing next year’s conference. Of course I’d jump at the opportunity to go again, but I wouldn’t want to take a spot from other Canadian educator. If you are interested in Microsoft’s E2 conference, apply to become an MIEExpert here. I promise you won’t regret it! 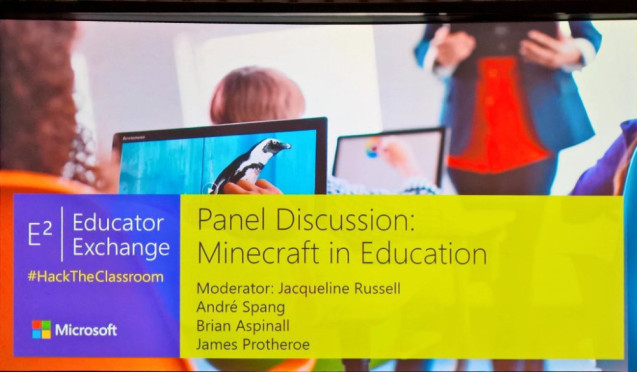 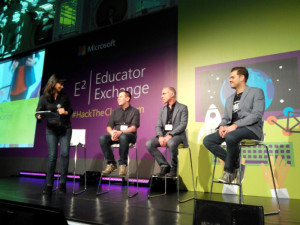 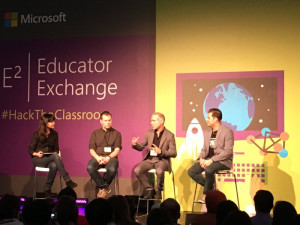 Thx & congrats #MIEExpert who attended E2, & to all educators globally who inspire students every day. You are my heroes! #hacktheclassroom

The Real Value of Computer Science