PhotoMath came across my Zite feed today and I jumped at the chance to read the article with my students, in the moment – they then wrote opinion blogs on the thought of an app doing their ‘homework’. I had a hunch it was the app I have been looking for – and predicted a few years ago. I thought Siri would be the first, but it looks like a third party developer beat Apple to the punch.

PhotoMath uses your device’s camera to examine a math equation. It recognizes the numbers in the equation and begins to solve the question in a series of steps – and it doesn’t even fill the camera roll because it doesn’t take a picture.

The app can do arithmetic: addition, subtraction, division and multiplication. It can handle fractions. It knows what 23 is and can calculate the root of 246. It can even do simple linear equations, provided the x you’re solving for is italicized so the app doesn’t confuse it with the x multiplication symbol.

As of now, the text must be printed and not hand written but who knows what an app like this will be able to do in a few years. Also a point of highlight from the same CNN aticle:

The app may pose a problem for schools are already dealing with smartphone overload. Math teachers will have to be extra vigilant during tests to prevent students from cheating.

This is where I am conflicted. I don’t see using a tool like this as ‘cheating’. I think we need to rethink the kinds of questions we are asking of our students. Questions that an app can answer may not be the richest types of questions. While I agree that rote learning is important, do we need to assess these kinds of questions? As a human I still need to be able to determine if the app’s solution is reasonable and understand the recommended steps it suggests. These kinds of apps will never replace human logic (in my lifetime) and should be used as a natural scaffolded kind of differentiated instruction. What if phones were allowed during high school exams? We would have to reconsider the types of questions we ask – but more importantly, make us think about why we are asking these questions. What is it we really want our students to know?

I think we should embrace apps like this and have students collaborate on richer, more authentic tasks than just singular equations.

I am really concerned about the outlook we have for our education, but I won’t generalize from just these two articles.

Officially, it’s meant to save you time flipping through a textbook to check answers when you’re doing homework or cramming for a test. However, there’s a concern that this could trivialize learning — just because it shows you how to solve a problem doesn’t mean that the knowledge will actually sink in. And if teachers don’t confiscate smartphones at the door, unscrupulous students could cheat when no one is looking. The chances of that happening aren’t very high at this stage, but apps like this suggest that schools might have to be vigilant in the future.

Textbook? Vigilant? Cheating?? In the FUTURE?? All sounds contradictory to me. As a computer science major ten years ago, I was allowed textbooks during assessments. We didn’t memorize syntax but instead solved real world problems. Shouldn’t we do the same in today’s math class? I call math formulas – syntax. It’s the application of them I care about.

I think the bigger problem here is not apps like this, but the pedagogy in that we think we need to police and protect students from ‘cheating’. There needs to be a large shift in the thinking of educators and the general public alike. It is not bureaucratic. Times have changed.

We keep teaching students how to write a test. Sheep. System workers. Not critical thinkers. Not collaborators.

This app can do a lot of what we ask during standardized testing. Knowledge based factual kind of stuff. Maybe we need to rethink knowledge and understanding and focus on application, communication and critical thinking. Not to say be done with memorizing, but perhaps be done with assessing one’s ability to memorize.

My students asked me if they could use this app on next week’s math test. YES, we are having a test. I would be doing them a disservice if I sent them to secondary without knowing how to take a test. And it will be on paper.

PhotoMath from MicroBLINK on Vimeo. 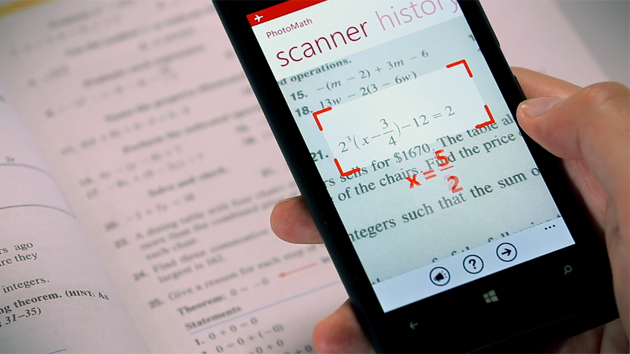 Why Teach Computer Science in K-8? I Want Every Kid to Code by @mraspinall

Leave a Reply to admin Click here to cancel reply.